for flute, clarinet, piano and electronics 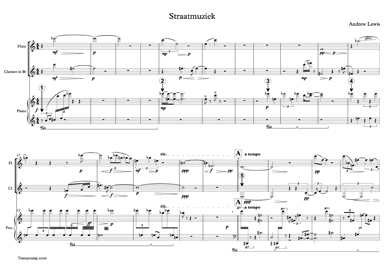 Straatmuziek began life as a recording of a squealing escalator I encountered late one night in The Hague, connecting the deserted elevated tramway with the equally deserted street below. Each time the escalator completed a loop, it intoned the same melancholy song, which appeared to obey its own arcane and other-wordly rules of melody and harmony. It seemed to me to be a perfect example of how strange beauty can often emerge from the apparently lifeless and mundane, and how the human spirit transcends the inert matter that contains it.