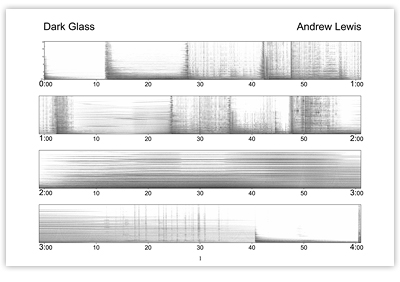 “… what we will be has not yet been made known…”

When a piece of glass breaks its physical structure is broken, degraded, and ultimately destroyed; but at the same time its liberated fragments are able to resonate with a new music, a unique harmony which was always present in the original pane, but which could only be freed through the act of destruction. Since each piece breaks in a different way, the resulting pattern of pitches and resonances is always unique, and since the fragments add up to the same total surface area as the original pane, there is a subtle and beautiful logic to the way these harmonies are constructed: larger, lower pitched fragments perfectly balanced by smaller, higher pitched ones. Thus a kaleidoscopic variety of colour and beauty emerges from panes of glass which appeared uniform and commonplace, a unique and personal song which only destruction can bring to light.

Dark Glass was realized between 2009 and 2011, and revised in 2013, in the Electroacoustic Music Studios of Bangor University (Wales, UK) and premiered on October 28, 2011 during the MANTIS Festival at the Cosmo Rodewald Concert Hall of The University of Manchester (England, UK). It was a finalist in the Musica Nova competition, 2013. Thanks to staff at Hughes Glass in Llandygai (Wales, UK), and to colleagues Guto Puw, Stephanie Marriott and Steve Marriott for providing materials to be liberated.