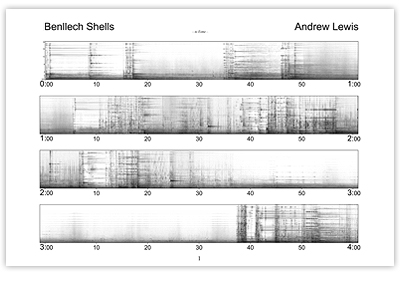 High summer, a crowded, baking beach. Noise, movement, ice-cream, diesel. Children and adults alike are drawn to the foaming shore, melodious squeals and cries bobbing up momentarily through the noise of the surf. Away from the water families stake their claim with colourful fortifications: parents bask and sweat, little ones search the sand. "I've found a shell..." The child's eyes and ears collect her future memories. "We could save this shell..."

Putting a shell to our ear to see if we can 'hear the sea' is perhaps the earliest experience any of us has of transforming sound artificially: the resonant characteristics of the shell filter the sounds coming from outside to create a wholly fictitious but nevertheless magical aural impression of the sea. Benllech Shells employs computer technology to much the same ends, lending an extraordinary aspect to ordinary and familiar sounds. The piece also draws parallels between this transformation and the way that memory transforms childhood events (in this case, the sights and sounds of the seaside) to create an often fictitious but nevertheless magical impression of the past.

The original stereo version of Benllech Shells was composed in the Electroacoustic Music Studios of Bangor University (Wales, UK) in the summer of 2003.